The new AIFM Directive has made significant changes in the regulatory environment of the alternative fund industry. The role of the depositary has not been changed substantially, but the risks to be monitored by the depositary and potential liability have increased significantly. Core responsibilities of an AIFMD Depositary include

Depowise was specially built to support Depositaries in fulfilling those duties. 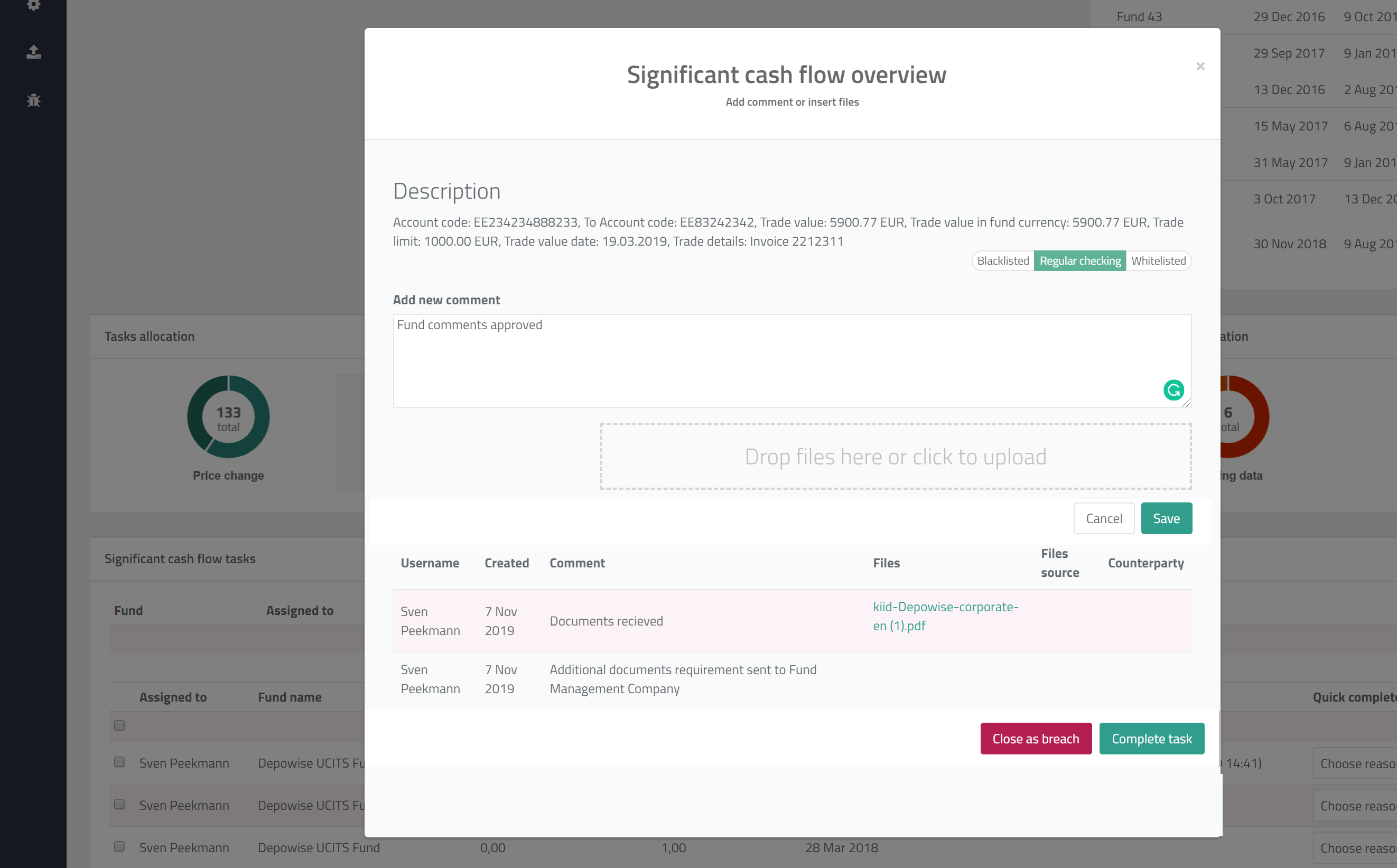 Common reasons for cash transactions can be predefined and used to close transactions that do not require any further investigation. This will increase the time you can spend on your other tasks.

Depowise reports give an overview of checked transactions and show the results of any measures taken.

A built-in workflow engine supports building dynamic processes and configuring every action on the way. The steps include collecting documents, reviewing transactions, performing manual activities and many others. Every action taken in the workflow will leave behind evidence in the audit trail.

Safekeeping fund assets under AIFMD is complicated and includes high risk if you don’t have a register for investment records, asset, and liabilities. The “look-through” measures introduced with AIMFD require depositary banks to maintain information of assets owned by the SPVs and CISs.

Depowise asset register is designed to help depositary banks keep records of investments together with documentation and the entire history of changes. Our asset register supports the hierarchy of the ownership and helps you visualize the structure of the assets held by the fund. Depowise supports keeping information about different types of assets and lets you define the various types of information required.

Knowing the list of investors committed to the Fund is crucial for AIFMD depositary oversight responsibilities. Depowise investors register keeps track of the owners of the Fund, their commitments and drawn funds. Upload initial investors register using Excel or add investors manually with their bank account information. Building Fund specific workflows with different checks and decision points for capital call and distribution together with a reconciliation of cash transactions will save You time in operation and provide You secure audit log for compliance. 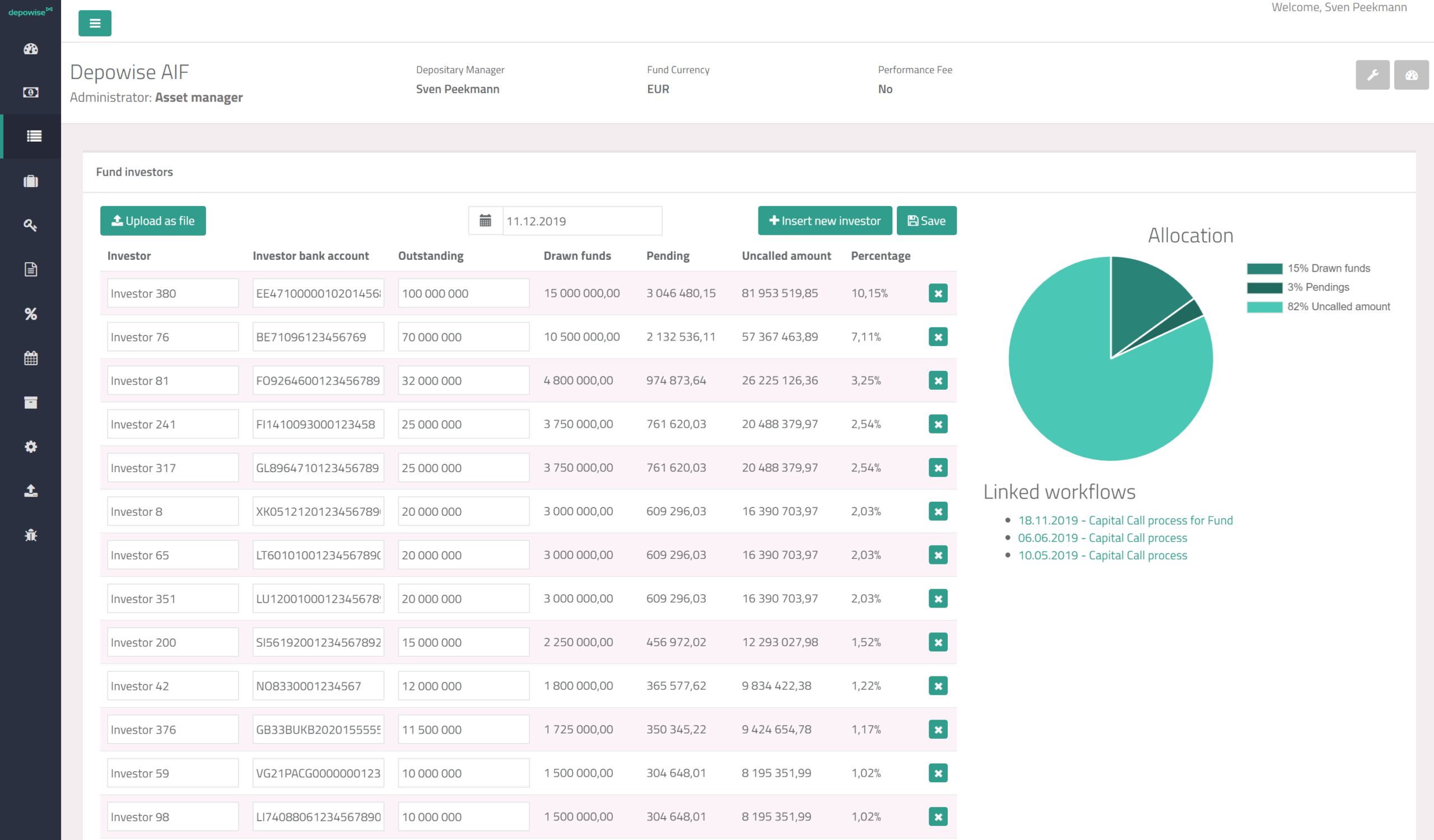 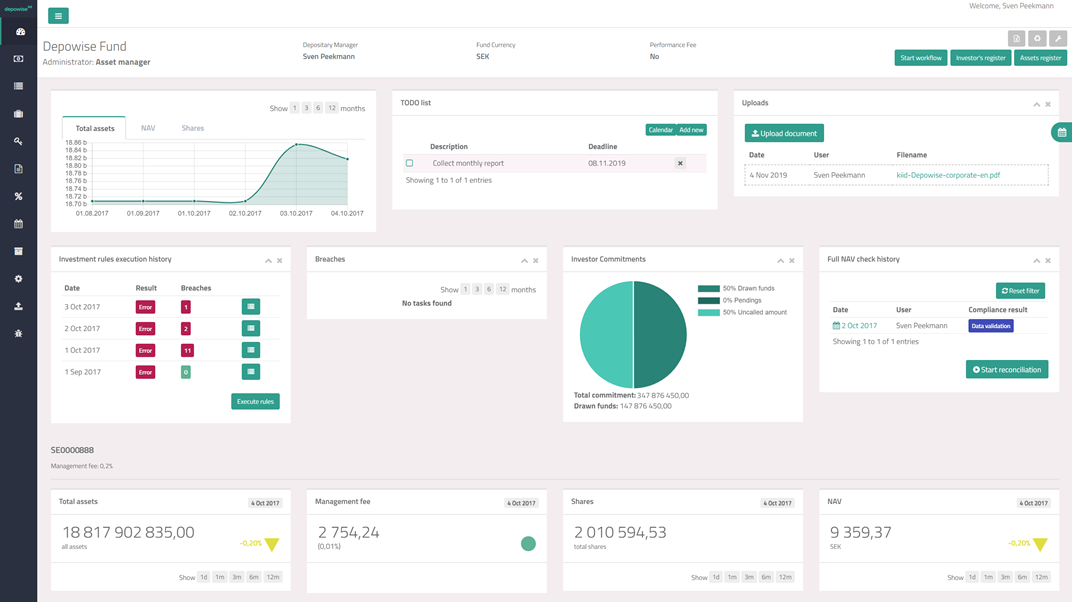 The Fund Daily Dashboard brings all necessary data into one view allowing the users to focus only on the most urgent and important matters. Depending on the role of the user, the dashboard provides the status of a single fund or an overall total funds view.

The Central Data HUB and the ETL layer are the technical core of Depowise. The ETL layer exchanges data with external counterparties, uploads data into the staging tier of the data-HUB and transforms the data into a common standardized structure (i.e. data-HUB production tier).

Only validated data is provisioned into the production tier of the data-HUB to be used in other modules. The staging tier is a base for initial technical and business validation of data and provides a full log of data exchanged between the data source and the Depositary. 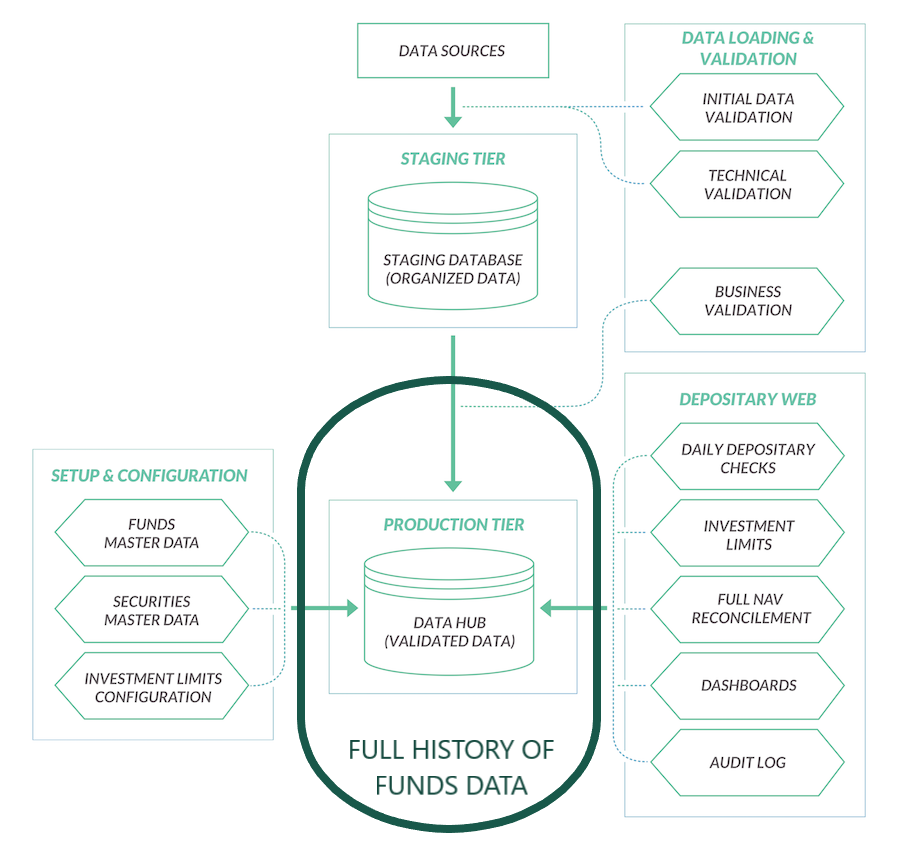 Data quality and integrity are critical for Depowise to provide value and produce reliable results. Depowise executes three data validation steps before data is provisioned into the production tier of data-HUB:

East Capital is a multi-national financial asset management company with ever-increasing demands on availability of accurate financial data and business intelligence. As such, we greatly value the knowledge and long-standing commitment to quality that the people of Net Group bring to their clients.
Lars SönnerlidChief Information Officer at East Capital

THESE FUNCTIONS SIMPLIFY THE EVERYDAY WORKLOAD OF YOUR DEPOSITARY

Want to see the benefits of using Depowise with your own eyes?

Give us two weeks and we will use the data from one of your funds to create a solution. Interested? Send us a message and we can start now.

Menu
By using this site you agree to the use of cookies for analytics. We use cookies to ensure that we give you the best experience. Ok